Today about 1600 species of fleas are known worldwide, of which about 80 species live in Central Europe. While other stinging insects can not survive without their host, fleas have developed an amazing adaptability throughout history. If the prerequisites change in their environment, they adapt themselves in a short term and just change the host, for short or longer periods, when the new conditions are more attractive to them. Fleas feel good on all warm-blooded animals. Previously, human fleas were the constant companions of our ancestors. If you are attacked today by a flea, it is mostly a dog, cat or bird flea. These fleas owe their names to their principal hosts, but in the absence of them they attack other warmbloods, and so also humans. A flea can sting several times a day, but also starve a month. As fleas only make a few “specimens”, these stitches are, as a matter of fact, almost always in rows of covered body parts. These stitches are often itchy when the flea has already disappeared.

Fleas have a laterally flattened, brownish body and are wingless. The adult animals are between 1.5 and 4mm long. Their shell is so strong that it can hardly be crushed. The flashy movement of their bones is considered to be the fastest amongst all known animals. With their powerful hind legs, they can jump up to a half meter. In addition to the muscles which can not accomplish this performance alone, their legs have a cushion of elastic protein that is stretched like a bow. The direction of her jumps, however, they can not determine very precisely. However, for a quick escape it is usually enough. 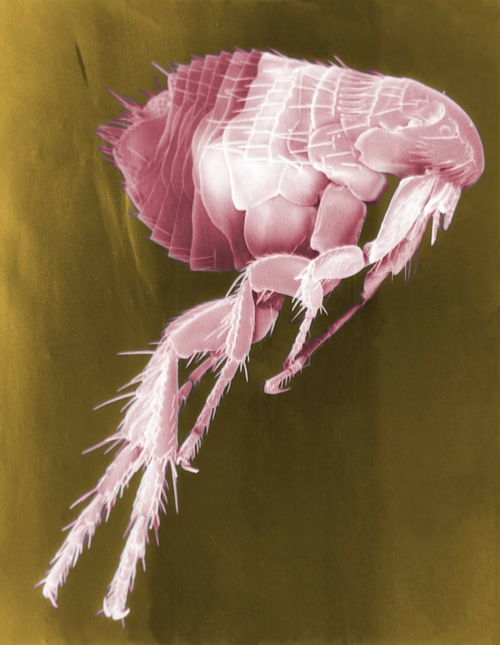 A female flea puts between ten and forty eggs a day. These eggs are oval, transparent and about 0.5 x 0.3 millimeter in size. The freshly laid eggs are still moist and stick to the host. After two hours the eggs, whitened in the meantime, are dried out, and after another six hours two-thirds of them have fallen to the ground. For their further development, the larvae need high humidity and moderate temperatures. To find these conditions, they can perceive mechanical stimuli and detect sources of moisture. For protection against direct sunlight, the larvae disappear quickly in the grass or under leaves if they are outside in a natural environment, while they are often hiding in floor prisms, upholstery or carpets inside buildings. Flae larvae feed on the excrements of older fleas, which they chew with their mouth-tools. If the adult fleas absorb and excrete more blood than they can digest, the larvae develop all the better.

After another two or three moulting the larvae grow to four to five millimeters in length. At the end of their development they spin, with the help of their salivary glands, and build a silk-like cocoon of about 0.5 x 0.2 millimeters in size. The cocoon is camouflaged by attaching material from the environment. Particularly problematic for a sustainable control of fleas is the fact that the larvae inside their cocoon can survive under the most difficult conditions. Even if the larva is disturbed in its pupation and it does not form a true cocoon, the development in this naked and uncoated pupal stage is nevertheless possible. The flea larva needs at least 50% relative humidity and a temperature of at least 27 ° Celsius to hatch from its pupa sleep. In the Algarve these conditions, especially near the sea, are ideal in the interior of houses during the warm months of the year. If the environment and conditions are not ideal for the hatching, the larvae can remain in the cocoon for up to almost four months.

The main trigger for the hatching of adult fleas is a temperature from 32 to 38°C, the emission of carbon dioxide in the air, a change of the light, and pressure on the cocoon. Immediately after hatching, the animals look for a host. In their orientation, they are helped by an organ which enables them to perceive air movements and vibrations. They choose their host, although their eyes can only see bright and dark. If they have found and attacked a host, the significantly more hungry and larger females suck about 13.6 microliters of blood in twenty-five minutes and increase their body weight by 140%. The males, on the other hand, are already finished after eleven minutes and only increase by 19% of their body weight. If no host is found, fleas can also go hungry for a long time. Dog fleas e.g. can remain 62 days without sucking blood. Already after an hour, almost ninety-eight percent of all fleas sucked blood for their first time. Eight to 34 hours after the first blood meal, the fleas mate for the first time and the cycle begins again. Suck fleas regularly, they can reach an age up to 130 days. Adult fleas do not skin anymore and only swell after the sucking of blood. Fleas sting and suck like mosquitoes with a two-channel stinging device. With the larger channel, they suck blood. Through the smaller channel they inject saliva, which anesthetizes and at the same time prevents the blood clotting. The effects of flea stitches are much stronger, but otherwise very similar to mosquito bites.

As we know from fossil finds, the first flea-like animals already lived 135 million years ago. The fleas, which were found in 64 million years old Baltic amber and prehistoric mammals, are not quite as old. These, however, no longer differ from today's fleas. All flea species have developed parallel to the warm-blooded animals. A first recipe for a flea control was already written down in a medical writing from the ancient Egypt in 1500 BC. In Antique and in the Middle Ages it was thought that fleas came from the dust and putrefaction of organic substances.

Fleas differ in their behavior. Due to their small size, fleas can not be distinguished from one another just by the eye. Only under the microscope a species determination by looking at spines on the head and back as well as by the a different head shape is possible. Some flea species, such as the human flea, attack their host only if they want to sting, while others, such as dog or cat fleas, are constantly living on their victims.